When men and women reach that certain age and look in the mirror and think, 'Need to lose a few pounds' then a lifetime of diet and exercise beckons. Men are lucky, they can lose weight and their faces become gaunt that at worst is interesting to look at. Sadly and unfairly this isn't the case with women. I haven't seen La Platell for some time and she's lost a lot of weight, her face was haggard. Unlike a man who has dropped a few stones but is generally covered up a woman puts on display her bare legs and arms and Mandy's were bordering on skeletal.

A Glenda should point this out in their column. Fair's fair when it comes to making personal comments about other women's looks, eh, Mandy?

It was worth watching to see her outrageous flirting with Yanis Varoufakis, she was all over him. His body language suggested she was out of luck.

Why Dr Eva Carneiro will live to regret her £5million victory


There was a haunted look on the face of Dr Eva Carneiro as she left an employment tribunal this week following a secret deal which ended her sexual discrimination claim against Chelsea Football Club.
My guess is that although the former team doctor had won a pay-out estimated to be a staggering £5 million, she may have realised that despite her stunning victory, her decision to bring the case may have been a terrible mistake.
Like many women before her who have bravely challenged males bosses over perceived sexism, the long-term effect could be deeply damaging.

Take two previous high-profile cases, in which successful City women (bankers Svetlana Lokhova and Isabel Sitz) took on their bosses for sexual discrimination. They won huge pay-outs of up to £3.2million but admitted afterwards that they were left feeling debilitated by the experience, with their self-confidence shattered.

During the tribunals they would have had to defend themselves against an army of lawyers and the inevitable courtroom attempts at character assassination.


Dr Carneiro, as we know, lost her job after the then Chelsea manager, Jose Mourinho, called her a ‘daughter of a whore’ for treating a player on the pitch he didn’t think was injured.
The 42-year-old doctor claimed she was simply seeking what was called a ‘whole career loss’ damages, which is probably an accurate description.
By challenging the oafs who control football, she will almost certainly never again get the job she loved in the industry she loved.
Why would a manager hire her if he feared she might be noting down or squirrelling away incriminating comments or emails for possible use in some future discrimination claim?
At the end of the case, Dr Carneiro said: ‘It has been an extremely difficult and distressing time for me and my family.’
Yes, sexist behaviour is unacceptable, but any woman brave enough to confront it needs to know that money won’t necessarily compensate her for the nightmare she will go through.
Revenge, however, justified, has a tendency — like a penalty rebounding off a goalpost — to bounce back and hit you in the face.

So what does Platell think that women should do when faced with abusive employers? Presumably Platell just turns a blind eye to Paul Dacre's daily rants and just thinks herself lucky that she gets paid well for churning out predictable lady bashing drivel.
Last edited by satnav on Sat Jun 11, 2016 3:05 pm, edited 1 time in total.
http://tiny.cc/tqugax

-  Sat Jun 11, 2016 9:51 pm #460964
I suppose the notion that a future manager might consider not being a fucking arsehole is beyond our Mandy.
Ní uasal aon uasal ach sinne bheith íseal: Éirímis

-  Sun Jun 12, 2016 11:00 pm #461009
Why would she have her "self-confidence shattered" by taking on and winning against "an army of lawyers and the inevitable courtroom attempts at character assassination."?

And why would any manager assume she must be "noting down or squirrelling away incriminating comments or emails for possible use in some future discrimination claim?" She obviously didn't do anything of the sort in this case, given that Mourinho was obliging enough to discriminate against her in front of cameras broadcasting the whole thing to millions of witnesses.

And I can't see that a qualified doctor with a good reputation in the field is ever going to struggle to get a job. Not that Dr Carneiro is exactly going to starve anyway with £5m in the bank.

-  Mon Jun 13, 2016 7:23 am #461020
Given that journalism (particularly print journalism) is pretty much the last bastion of work practices long since eliminated in the rest of polite society - namely massive workplace bullying and inbuilt 'isms' - there seems to be a particular brand of columnist, usually female, who specialise in this sort of article. "Yes it's tough, yes it's unfair, but we all had to deal with it so stop whining". The idea being that rather than set in place some rules to prevent such behaviour, it's best to let things continue and trust in strength of character to see you through. There's an element of one-upmanship in there too - "You think you've got it bad, you don't know what bad is...".
"I've tried to think of something clever to say about Rod Liddle, but I think he's just a cunt."


Unafraid, I will be voting out
With only six days before we vote, I’ve made up my mind. Initially my heart said ‘out’ while my head said ‘in’, but after weeks of campaigning I have come to see that Remain’s arguments have never been more removed from the honestly held concerns of real people in this country.
The metropolitan elite, the bankers and the luvvies have all tried to scare us into submission.
The more they talk down the nation I, as an Aussie, have come to love, the more I’m certain we can thrive outside the EU.
Britons are right to be proud of this country, its culture and values. And you are right to believe you can run your affairs better than the unelected Brussels bureaucrats. That’s why I’m voting Out

She's clearly worried about an influx of hard working journalists who have integrity and principles.
http://tiny.cc/tqugax

Abernathy wrote: Are we supposed to be impressed?

Yes. Because in the world of the post-enlightenment subjective emotionalism, it is considered by some to be more 'authentic' to follow reaction and prejudice rather than analysis and logic. They call it 'feelings'.

That this plays into the hands of demagogues and charlatans is never mentioned.
Do what you can, with what you have, where you are.

I still fear that half the population that was Voting to Leave despite the overwhelming evidence that this is a bad idea won't make any connection with these events and will continue to do so.

KevS wrote:When asked to confirm his name in court, Thomas Mair gave it as "Death to traitors, freedom for Britain."

Abernathy wrote: Are we supposed to be impressed?

Yes. Because in the world of the post-enlightenment subjective emotionalism, it is considered by some to be more 'authentic' to follow reaction and prejudice rather than analysis and logic. They call it 'feelings'.

That this plays into the hands of demagogues and charlatans is never mentioned.

What the hell is going on in peoples' heads? For polls to remain the same it is explainable


LONDON — British support for remaining in the European Union has weakened in the wake of the murder of the pro-EU politician Jo Cox, according to an online research company Friday.

Qriously, a London-based technology start-up that gathers data and intelligence about consumers through mobile phone apps, found that backing among likely voters for Britain's EU membership has dropped to 32% from 40% before her death.

The poll was based on 1,992 British adults surveyed on June 13-16, and then 1,002 on June 17 — the day after Cox was shot and killed in northern England. The start-up claims to have held the first such survey on the topic since the lawmaker's slaying. Most of Qriously’s surveys are done for corporate brands and it has not been previously conducted an EU referendum poll.http://www.usatoday.com/story/news/worl ... /86031038/" onclick="window.open(this.href);return false;

I don't expect people to change sincere long-held views about sovereignty or whatever on the basis of this murder but for a poll to swing to Brexit would be utterly terrifying. 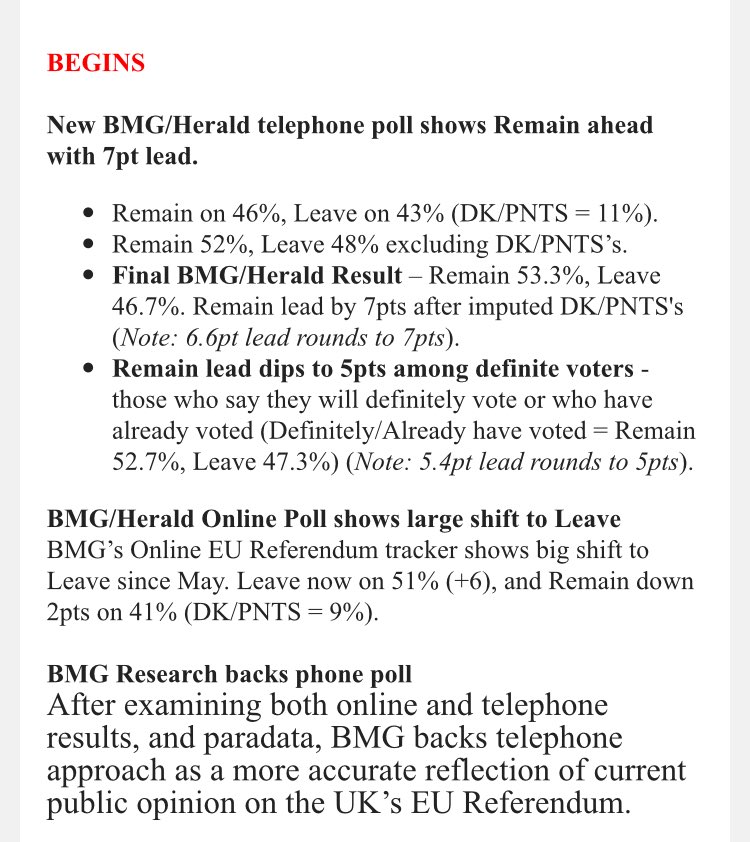 Abernathy wrote:Indeed. She gives no rational basis whatsoever for her "decision" and merely trots out the old "unelected bureaucrats" trope. Are we supposed to be impressed?

I've seen others do that, sometimes they like to bring up Greece and that to say isn't this terrible we should leave the EU.
Don't give me the Star Trek crap. it's too early in the morning.

Just a minor observation but has anybody else no[…]

What's that Oakshott's wearing in her profile pick[…]