-  Thu Nov 29, 2018 9:27 am #560221
Nearly £100k has been raised for him and his family. I understand that people have reservations about this sort of fund raising and perhaps chucking a load of money at him isn't going to solve or change what he's going through but I for one am pleased as punch. A new start, perhaps in a new area, comfort, a few things he could have only ever dreamt of affording but above all the knowledge that most people out there don't think he's a piece of shit on the bottom of their shoe.
Malcolm Armsteen, Catkins, spoonman and 2 others liked this
Others?

The fucking police. They investigate, it's clear a crime has been committed but they 'refer it to the school for action'.

And then the school refuse to do anything, because the police don't think it's a serious matter?

This brings back horrible memories of my 90s rough comp. The school would swear blind that there wasn't a bullying problem, but had to allow certain kids to leave classes five minutes early so they could get to the next class or start heading home to avoid being beaten up between lessons. If they wanted to avoid being beaten up in break times they could stay inside in isolation - not their bullies.

I see that Tommy Robinson has now waded in, claiming that Jamal is a sex-offending Islamist, and the attacker was simply defending English womanhood because the authorities wouldn't take action against a Muslim. No evidence of this of course. And no explanation of the attacks on his sister.
"The architectural style is early maniac" - Vila Restal

Catkins wrote: ↑
Thu Nov 29, 2018 11:12 am
I see that Tommy Robinson has now waded in, claiming that Jamal is a sex-offending Islamist, and the attacker was simply defending English womanhood because the authorities wouldn't take action against a Muslim.

If I was a lawyer, I'd be looking at that £100k crowdfunding total and considering how I could cut myself in for a piece of the action.

-  Thu Nov 29, 2018 11:22 am #560242
Imagine constantly claiming you aren't racist and then when you see a kid being badly bullied for being a refugee your instant reaction is to try and claim the kid is a rapist who deserved it. 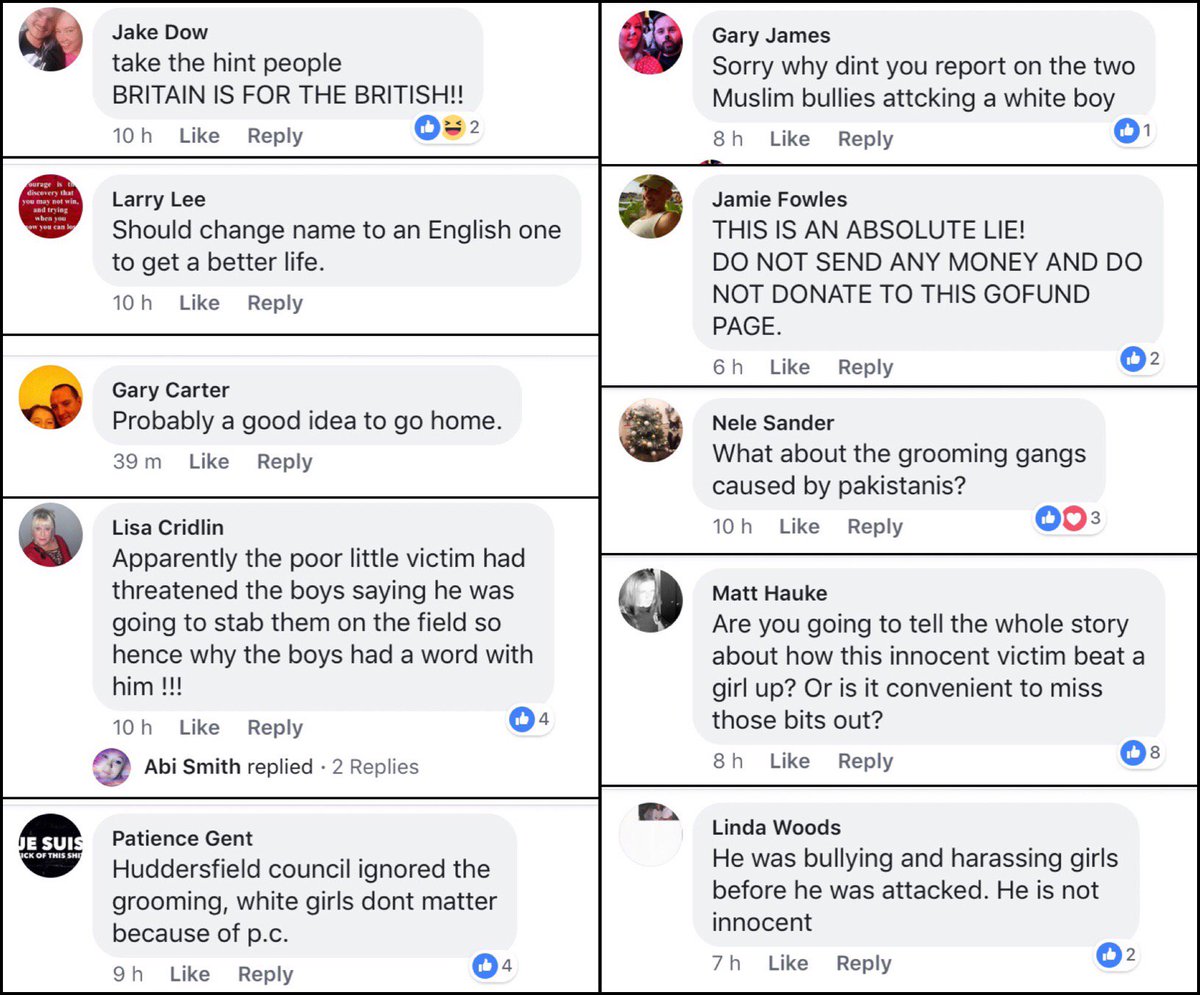 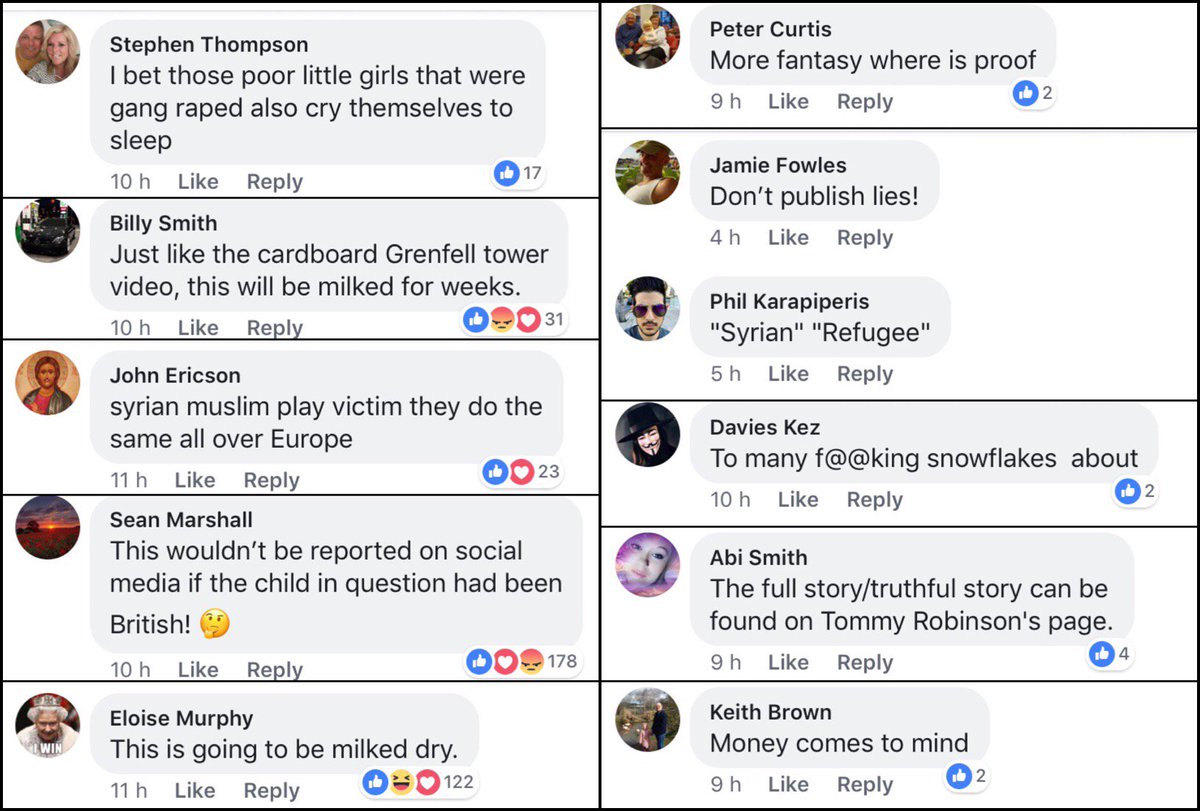 A Syrian refugee who was 'waterboarded' in a bullying attack turned up at the scene of a protest outside his school today.

Jamal, 15, said 'thanks to everyone' as he arrived at Almondbury Community School in Huddersfield to be greeted by 30 members of the public.

He was surrounded by protesters showing support for his family in the wake of the horrific assault, and just a few minutes later got back into a car which drove off.

Mr Akunjee also said he is considering taking legal action against Tommy Robinson on the family's behalf after the water-boarding victim was wrongly linked by the former EDL leader to an attack on a schoolgirl.

'This is something that has just added to the terrible situation Jamal is in.'

The mind still boggles that anyone sees Stephen Yaxley-Lennon as someone to go to when they have a concern about anything - and from the look of this, it seems like it was a straightforward case of someone thinking that one of Them was getting publicity when they weren't, and that a convicted fraudster and thug was somehow the person to do something about it.

Well, they've got their publicity now. And got an already persecuted child demonised by a racist mob who need a scapegoat to justify their own prejudices.

The school obviously has problems that need addressing with students of all ethnicities - but the ignorance and gullibility required to think that he's the answer makes me think that the community may not be addressing them any time soon.
"It is the duty of a newspaper to comfort the afflicted and afflict the comfortable."

-  Thu Nov 29, 2018 5:58 pm #560287
Unfortunately the damage has been done and the No Smoke Without Fire mob are out there again. There are no innocent Muslims.
Catkins liked this
We've got democracy! Who needs solidarity?

-  Thu Nov 29, 2018 6:17 pm #560289
Without wanting to generalise too much, this is a west Yorkshire housing estate. Look at how the mother of the girl in question spells her name. It's Karen Matthews territory.
Samanfur liked this
"It is not enough to succeed. Others must fail." - Gore Vidal.

Have they run any articles recently about what a foul sewer Facebook is?
Jack believed in the inherent goodness of humanity, and felt a deep social responsibility to protect that. Through us all, Jack marches on.

It has been pointed out that he's nicked the pictures from newspaper reports of an autistic kid beaten up in Surrey last year.
"The architectural style is early maniac" - Vila Restal
Others?

He could do well to ignore drivel like this. http[…]

Blimey. Obviously I hope Johnson recovers. And as […]