Safe_Timber_Man liked this
The Red Arrow is currently appearing in 'Ram it home, Mrs Henderson' at The Minack Theatre, Penzance

-  Thu Dec 20, 2018 1:00 pm #561981
The Sun, employer of Rod Liddle who has most definitely used phrases similar and worse than "stupid woman" are suddenly very angry about misogynistic language:

CORBYN called Theresa May “stupid woman”. He knows it, his aides know it, his supporters know it, professional lip-readers know it . . . everyone knows it.

The misogyny and disrespect is bad enough — especially from the man who trades on his veneer of civility and his allegedly “kinder, gentler” politics.

The real measure of him is that he fled the Commons before he could be called to account for it — then made up a cock-and-bull story to avoid being forced to apologise once he was summoned back.

This is the coward and liar Labour want to install in No10.
But the party’s venality gets worse.

Because when Speaker John Bercow was himself then accused of calling a Tory “stupid woman”, Labour Remainer Margaret Beckett stood up for him and hollered at the Tory benches.

Not for her the solidarity shown by other female MPs across the House. ­Oh no. Bercow can do no wrong so long as he helps her and her pals reverse Brexit.

God help us that our politicians have sunk this low.

They're still not quite grasping the whole "Leave means leave" thing:

THE EU no longer even pretends it wants warm relations with us after Brexit.

The barrage of punitive threats it has issued to our expats, tourists and firms in the event of no-deal is openly hostile.

There is no guarantee Brits living on the continent could stay despite us having promised that for EU citizens here.

Our airlines would be barred from flying from the EU to the rest of the world.

Brussels even declared war on our pets, intending to annul their passports.

Some of it is malice. When has Britain been anything but courteous to them?

But these are mainly scare tactics aimed at strong-arming Tory MPs into backing Theresa May’s deal.

Yet the EU also wants us simply to trust it to eventually release us from the deal’s restrictive “Irish backstop” which cripples our trading future. Why would we? All trust is gone. Brussels has spent two years destroying it.

Without a binding guarantee, The Sun cannot see the deal getting the nod.

We must be ready for Brexit on March 29 without it.

-  Fri Dec 21, 2018 10:34 am #562058
Saw the Sun's front page a couple of days ago. What do you expect will be their most pressing concern right now: Brexit? Environmental catastrophe? The state of the high street or the economy in general? Nope... the main headline was that Yorkshire tea has taken the plastic out of their teabags, making them split open, and this has put "the nation in crisis"!
A strong and stable forum in the national interest. 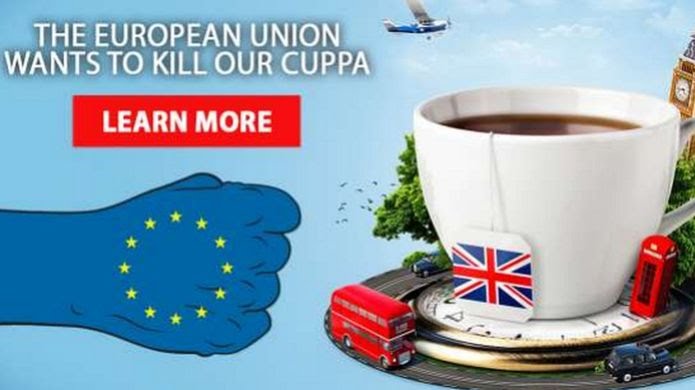 
You'd think they'd update the playbook...
Do what you can, with what you have, where you are.

Watchman, Malcolm Armsteen liked this
"It is the duty of a newspaper to comfort the afflicted and afflict the comfortable."

A MOTORIST says he saw the Gatwick drone wolf pilot frantically packing two craft into a rucksack before riding off on a bicycle.

The man had been standing over one 4ft drone and another 2ft device, Mr Motts reported.

This is why we can't have nice things.
Do what you can, with what you have, where you are.

The Sun’s former political editor Trevor Kavanagh has defended newspapers’ decision to name the couple, telling BBC Radio 4’s Today programme on Monday that the information came from neighbours of the couple and publication helped “hasten the process of the law”.

“Were it not for the press, I don’t think the police would have been so quick to discover this particular suspect had a cast-iron watertight alibi,” he said.

Bollocks. The suspects would have known they had alibis, and told the police early on.

https://www.theguardian.com/technology/ ... bel-payout
They fuck you up your mum and dad,
But not as much as Brexit will.

Are they doing it all for a joke, do you think?

This cheeky attack ad is being labelled as &lsqu[…]