No ambiguity. Just simply "OK, big balls. You've shown us your timeframe, you told us what you can do. Deliver it or STFU".

I give it a fortnight till the Sun has her photoshopped in the full Hugo Boss rig.
oboogie liked this
Ní uasal aon uasal ach sinne bheith íseal: Éirímis
Others?

Anyway, post-Brexit trade deals.
spoonman, oboogie liked this
Jack believed in the inherent goodness of humanity, and felt a deep social responsibility to protect that. Through us all, Jack marches on.

Britain is a sales rep continuously traveling along a very long motorway. Every other nation in the world is the motorway services operators. Sure, they could charge Britain normal, comparable rates to those charged in their other shops away from the motorway, but it's not like Britain had much choice in the matter, so they put the arm in right to the shoulder.

Britain used to work in a nice airy office with loads of shops round it, a subsidised canteen and a much nicer company car. They could go back tomorrow, but they changed jobs a few years ago because they were paranoid about what the Polish cleaners were talking about, and they can't go back on such a decision.
Ní uasal aon uasal ach sinne bheith íseal: Éirímis

MisterMuncher wrote: ↑
Wed Aug 21, 2019 7:44 pm
I give it a fortnight till the Sun has her photoshopped in the full Hugo Boss rig.

You reckon it'll take that long? They're likely to have their graphic editors already on the job.
Currently listening to: "You Just Like Me Cos I'm Good In Bed" by Skyhooks
Now part-time on Tw*tter @spoonyfrommwf 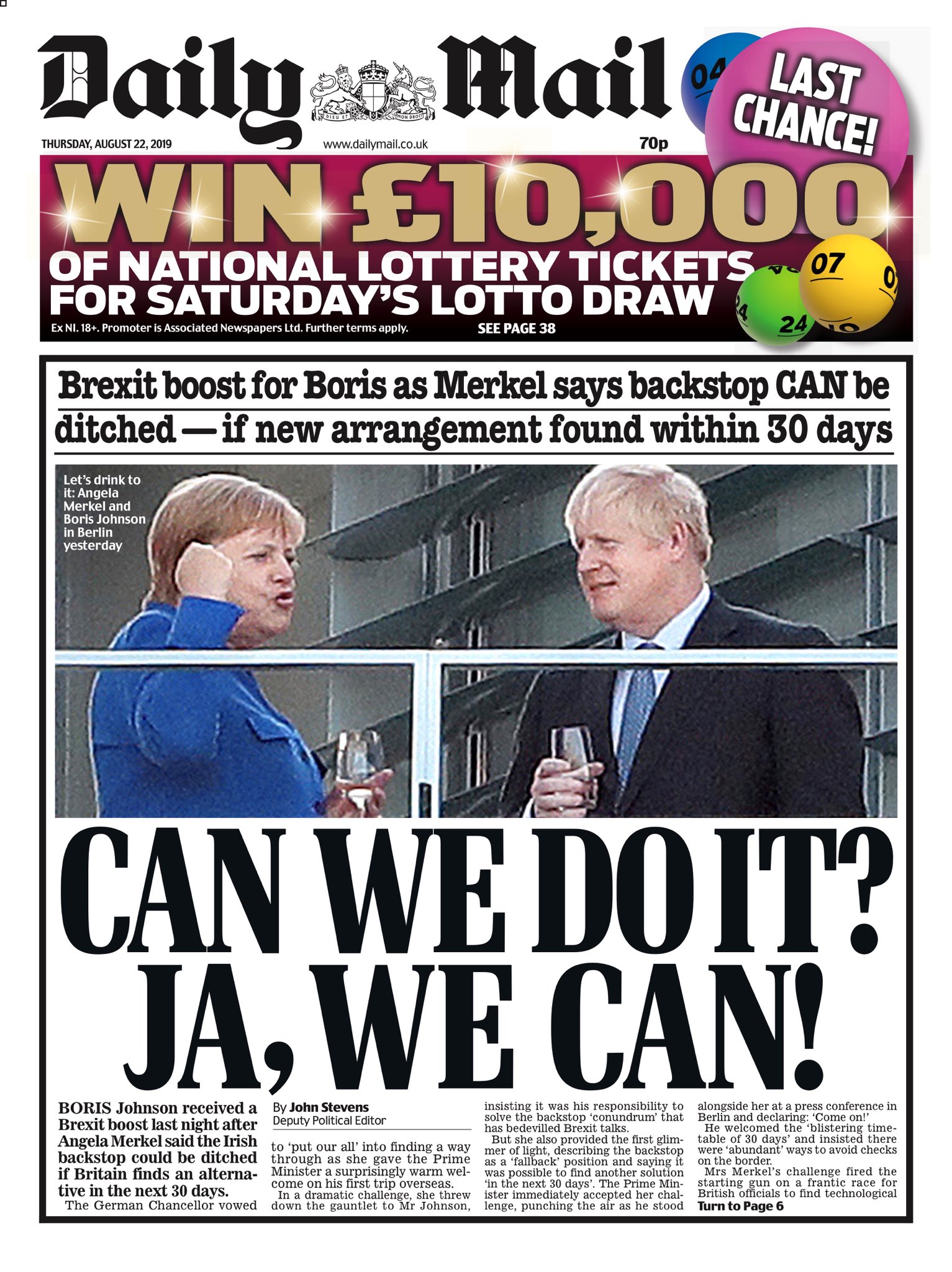 -  Wed Aug 21, 2019 10:35 pm #584173
It's all a game to these twats. All I can see here is the precursor of "We really tried. We tried *everything*, but those Germans/Paddies just wouldn't budge, and they only gave us a month, too, the bastards"
Boiler, Snowflake liked this
Ní uasal aon uasal ach sinne bheith íseal: Éirímis

I wonder whether he said "OOmph" as it tickel his prostate.
The educated differ from the uneducated as much as the living from the dead. Aristotle

-  Thu Aug 22, 2019 8:02 am #584177
And I've no doubt that Mutti is speaking for all of the grown-ups, as they will have all got their shit together in an orderly and timely fashion
Boiler, spoonman liked this
The world is not full of arseholes; but I always seem to encounter at least one a day!

You'll catch no fish in a clear river.
The educated differ from the uneducated as much as the living from the dead. Aristotle

I am shocked - as is capitaine de police Renault.
The educated differ from the uneducated as much as the living from the dead. Aristotle

In other news, spot the logical fallacy:


Boris Johnson has issued a fresh warning to MPs tempted to try to block a no-deal Brexit, with a senior government official insisting “politicians don’t get to choose which public votes they respect”.

I was slightly confused by deFaffle's wording ....banned due to some sort of food and drugs administration thing.....which to me implies that it's the Yanks who have banned it, so not sure what his context is
The world is not full of arseholes; but I always seem to encounter at least one a day!

Reply
Return to “The Government”
23 Sep

Since when did Momentum become experts at "ta[…]

Even Trump can think up amusing nicknames. They&rs[…]

Ben Bradley is possibly the only MP as bad as An[…]

It's not like Italy got absolutely hammered by COV[…]