Tubby Isaacs wrote: ↑
Wed Aug 21, 2019 4:16 pm
Somebody suggested Brexit wasn't one of the initial prompts in that poll. That would understate the Brexit score.

That seems to be the case, i.e. Farage's mob are underrepresented because, for whatever reason, this particular polling organisation chose not list them as a choice alongside the more established parties. A peculiar decision, since they topped a nationwide election only a few short weeks ago in May.

I'm not for a minute suggesting that things aren't a bit grim for Labour right now, but it certainly doesn't feel like the Tories are quite that far ahead, or anything like to be honest.
"Patience is bitter, but its fruit is sweet" - Jean-Jacques Rousseau

Couple of people BTL show up and point out that Jez kept nearly all the benefit cuts.

https://www.bbc.co.uk/news/uk-england-s ... B6SwuYvfV4
That subtle admixture of the absurd and the surreally plausible...

I suspect a general election will have been called before a by-election takes place in Sheffield Hallam. But either way, Labour may as well not bother turning up in this particular constituency for a few election cycles. What an absolute fiasco.
oboogie liked this
"Patience is bitter, but its fruit is sweet" - Jean-Jacques Rousseau

Tubby Isaacs wrote: ↑
Fri Aug 23, 2019 3:51 pm
Moaning about the electorate in Norwich who didn't care about the real issues and told her Jez was no good.

Hello. Member of the Norwich electorate here. Unfortunately that tweet has disappeared, so I have no idea what it said, but to be fair, I would be saying that Jez is no good
"He's the leader of the gang. He's the top, he's the tip, he's the championship. He's Top Cat. And he's scum!" 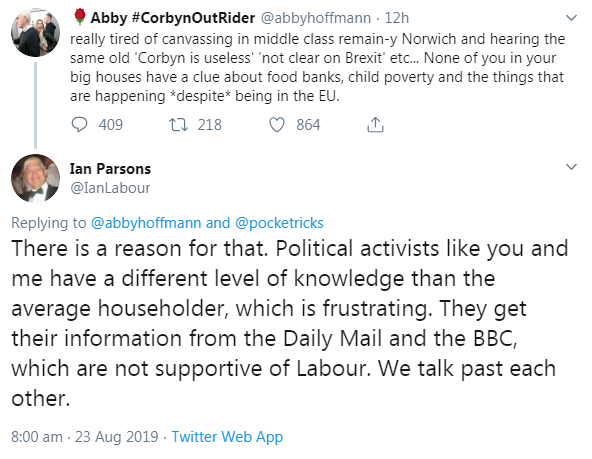 -  Sat Aug 24, 2019 7:52 am #584275
‘Deselect Norwich’ was among the amusing suggestions on that thread. If Corbyn’s even tanking with left-leaning middle-class voters in Norwich alarm bells should be ringing. I doubt Norwich’s traditionally strong working-class Labour vote thinks any differently about him.
Last edited by youngian on Sat Aug 24, 2019 10:43 am, edited 1 time in total.

It may not be fun or ideal or pleasing, but this is the fucking core of electoral politics.
youngian, Timbo liked this

-  Sat Aug 24, 2019 12:31 pm #584279
Clive Lewis has been careful to keep Remainers onside in Norwich. They ought to be on to pick up Chloe Smith's seat but defections to Greens and Lib Dems might be a problem. I don't know which constituency the OP was in.

It may not be fun or ideal or pleasing, but this is the fucking core of electoral politics.

And they have to be taught that we are right and they are wrong. This sounds like the depressing sort of conversation I've had more than once.
We've got democracy! Who needs solidarity?

You're chopping logic. MPs are the legislature,[…]

None of this lot would have made it further than M[…]