Britain reborn as a low-tax competitor.

* financiers, hedge fund operators, currency speculators....
Oblomov liked this
I know I ain't common 'cause I got class I ain't never used yet.

-  Tue Oct 08, 2019 8:54 pm #587517
Former Australian, now American media owners. My, the list is short.
Jack believed in the inherent goodness of humanity, and felt a deep social responsibility to protect that. Through us all, Jack marches on.

On any other day, that would seem strange.
youngian, Oblomov liked this
"It is not enough to succeed. Others must fail." - Gore Vidal.

Mrs Vardy has responded with a UKIP hacked account defence 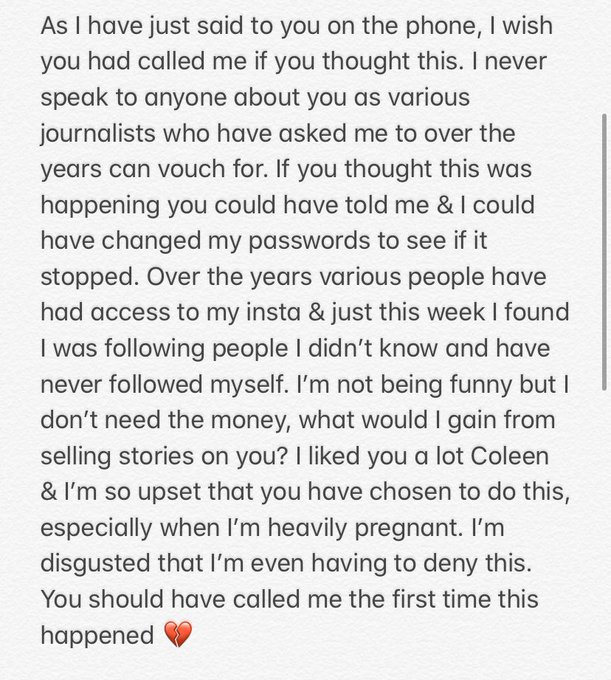 -  Wed Oct 09, 2019 11:21 am #587549
I hadn't realise being pregnant was a defence for being caught red-handed. Maybe Boris should have tried it at the Supreme Court?
We are the angry mob, we read the papers every day.
We like who we like, we hate who we hate, but we're all so easily swayed.

I'm torn. On the other hand I'm not sure that if categorically proven, grassing up a scouser to the Sun was a particularly good idea.
Life goes on with or without you, it's up to you what you're gonna do.
You could go or you could stay, who cares anyway?

relations with the EU which a second, rigged ­referendum would destroy for decades.

So this is now just being peddled as fact, is it? At no point have they ever explained why a 2nd referendum would be rigged. They just keep saying it.

TIME and again Britain has insisted we are leaving the EU’s customs union along with the rest of it. But Brussels will reject any Brexit deal unless we relent. This farce of a negotiation must surely end here.

Locking us into a body we voted to quit, or breaking up the UK by making Northern Ireland do so alone, is utterly unreasonable. The world can see that.

The customs union is central to the EU. Staying in it, but without a voice, is suicide. That’s what makes the Irish backstop toxic. And so much for that being a “temporary” fallback. Angela Merkel blew the gaff on that sneaky lie.

So did the EU chief reported as saying privately that Northern Ireland was “the price” we would have to pay for Brexit.

The Sun knew Brussels was not negotiating in good faith. This proves it.

No wonder tantrum-prone hothead Donald Tusk now resorts to abuse. He thought our future as a crippled, impotent EU colony was secured — only to encounter a new PM with more steel.

We would not blame Boris Johnson for pulling the plug. Indeed a clean break may be the only way to rebuild relations with the EU which a second, rigged ­referendum would destroy for decades.

But Boris should be wary of campaigning solely on a No Deal election platform if Remainers do force their “surrender” extension on him.

Yes, we are far better prepared for No Deal now. But plenty of potential Tory-voting Leavers prefer a decent deal.

A Boris majority might change EU minds. He should not rule out another brief stab at it — and No Deal if they still won’t get real.

WHO do the self-important nitwits of Extinction Rebellion think they are?

“Our demands have not been met,” a spokesman gravely announces, like a terrorist holding hostages.

What demands? Oh yes, the “zero ­carbon in six years” lunacy that would destroy the global economy and ­sentence the Third World to death.

Cops cannot arrest them all, sadly. Too few cells. But it is a disgrace that bridges are blocked, that patients struggle to reach hospital, that police casually allow well-heeled squatters to deprive traders of a day’s pay at Smithfield Market.

And that Labour, including London’s mayor Sadiq Khan, calls them “allies”.

How typical of Corbyn’s puerile hordes to side not with ordinary, fed-up Londoners but the hysterical, middle-class doomsday cult setting out to inconvenience them.

WE were so honoured to pay tribute to the unsung heroes of the NHS at our annual Who Cares Wins awards.

The health service has its faults. But the vast majority of staff are admirably diligent, dedicated and compassionate.

The Sun salutes you, the best of the NHS.


I imagine most of the NHS would love to tell you to shove your 'salute' up your fucking arse.

A Sun investigation has uncovered that record numbers of kids need critical NHS treatment for fat-related conditions such as Type 2 diabetes.

Medical busybodies have jumped on it — any excuse to promote the regressive sugar tax. Ex-Government advisor Dame Sally Davies wants it expanded.

But the sugar tax does only one thing - makes shopping more expensive, particularly for the poor. There is no evidence it’s making anyone less obese.

The answer to that is far simpler and lies in the hands of parents and schools:

Children should eat less, exercise more — and be taught early on how essential a healthy diet is.


NHS England boss Mr Stevens has delivered a bit of a slap down. Almost as if it were aimed at The Sun with their constant "nanny state" bollocks. I really won't be surprised if The Sun now start attacking him.

“I advocated a sugar tax precisely because it was felt that it would lead to the reformulation of the amount of added sugar in fizzy drinks.

“And that’s exactly what’s happened. So when you look at the evidence of whether or not the sugar tax has worked, the answer is: it has.”

youngian wrote: ↑
Wed Oct 09, 2019 10:26 am
They like a bit of Sunday afternoon Columbo in the Rooney household. This is the best spirit lifting story I've read in months.

"WAGatha Christie"
The greatest Hamlet of his generation, reduced to this.

But when the phone hacking court cases were going on, it was revealed that there were a lot of people who had been hacked and ended up wrongly accused, lost friendships and even jobs. Elle McPherson's PA was one. She was sacked, ended up having a breakdown. I think Charlotte Church said she'd cut off friends and family after she wrongly thought they'd leaked information, when the papers were simply stealing their data without their knowledge.
Snowflake liked this
"The architectural style is early maniac" - Vila Restal

THE SUN SAYS Chief Medical Officer Sally Davies lives for taxes, bans and hammering the poor whose diets she abhors

IMAGINE a nightmarish future society where ­buying biscuits is an act of shame.

Where chocolate, by law, is hidden in plain wrappers like cigarettes. Where football grounds have to ban pies in case working-class fans eat them.

Where taxes on treats are imposed ­specifically so the poorest cannot afford them. Where restaurants, already struggling, are forced to slash portions.

This isn’t a disturbing sci-fi drama. It’s the dystopian vision of outgoing Chief Medical Officer Sally Davies, the most deranged of the nanny-state zealots.

She won’t prioritise exercise and education to curb obesity.

She lives for taxes, bans, ending freedoms and choice, hammering the poor whose diets she abhors.

She is the poster girl of a metropolitan elite whose sneering disdain for the rest of us has never been more obvious.

She got lucky with Theresa May, who bought this guff. Boris Johnson won’t.

He should have a sharp word with Health Secretary Matt Hancock too.

How The Sun will celebrate Davies’ departure. Doughnuts all round!

WITH every barb and every snub, British hearts harden. Ex-Foreign Secretary ­Jeremy Hunt is right to warn the EU of that.

When Juncker says the UK will “collapse” in a No Deal, our people become more determined.

But the EU isn’t listening to Hunt. It prefers the comfort of Speaker Bercow telling them how he’ll stop us leaving.

Or Lib Dem leader Jo Swinson, sworn to revoke Article 50 or hold a rigged second referendum she would not honour if Leave won. What possible justification was there for her meeting EU negotiator Michel Barnier yesterday?

Brussels only listens to Remainers. So it thinks Britain has “changed its mind”.

It is, as Mr Hunt says, a “catastrophic miscalculation”.

EXTINCTION Rebellion should be ashamed that hundreds of cops are being diverted from across Britain to arrest them.

But once you swallow the “billions will die” fantasy, anything goes. It’s your free pass for anarchy. The science, though, does not support their apocalypse. They’re just a cult, breaking the law.

Ignoring that we already have the most ambitious “net zero” target in the G20, and the fastest emissions cuts, ­luvvie actors and rock musicians help fund this outfit to “hold the Tories to account”.

Who holds THEM to account? Their facile posturing is making our streets less safe. It inflicts huge costs on the police and justice system and ­economic damage on the capital. City Airport will be “shut down” today.

On taxpayers’ behalf, the Home Office should sue stars bankrolling this hysteria.

Because "This big monolithic thing that you[…]

No vetting necessary for our weirdo geniuses.. Str[…]