-  Wed Sep 18, 2019 3:30 pm #586063
This is a horribly dated anecdote, but 25-odd years ago at Uni we had a student union officer who is what would nowadays be described disparagingly as a centrist. They got loads done in their year, helped set up a lot of good things for less well off students, did things in the community, worked with the University admin on things like getting an SU bar etc.

The next year, the person who stood would these days likely be a momentum type. All they ever went on about in their election speeches was campaigning and protesting, and they scraped in just by chance as there was an influx of socialist worker types that year. In their victory speech they were ungracious and rude to their predecessor, and just went on and on about getting back to 'proper' left-wing politics.

In position, you'll be amazed to hear they were absolutely fucking awful - never available to help students, because they were almost always off blowing their budget transporting themselves and their hardcore entourage to any and every strike, protest or civil unrest they could find or perpetrate. Relations with the community disappeared as all they were interested in was showing solidarity with comrades, so more often than not they were out annoying the community, and the SU bar plan fell down as they perceived the university admin as 'the enemy' and that was that - they wanted all their demands met. No compromise, no negotiation. You were with them or against them. They were rude, stupid, inflexible and arrogant and caused harm to the SU's image that took years to repair.

Still, I'm sure Lansman's scheme will be fine.

EPILOGUE: by the way, they went on to work for a bank in the city - a job their dad helped them get into. Because they like telling people to live good socialist lives, but like fuck were they going to put in the graft to get anywhere.
Timbo, youngian, Andy McDandy and 2 others liked this

-  Wed Sep 18, 2019 7:39 pm #586085
Former Respect councillor Salma Yaqoob has joined the Labour Party and comes across as someone with political talent. It occurred to me that this is probably a first among new entrants from the left since Corbyn’s been leader.

-  Wed Sep 18, 2019 9:01 pm #586097
Well, well. She was, as the saying goes, no stranger to controversy back in the day but had slipped off the radar in recent years, apparently due to ill-health. She used to have a massive personal vote but whether that will still be there for her is a moot point. It will be interesting to see whether her next move is in the direction of Westminster, Birmingham Council House or the Metro Mayor's office.
We've got democracy! Who needs solidarity?

If Godsiff loses the trigger ballot, I'd certainly expect Salma to be going up against him for selection to contest the seat, assuming she doesn't get the mayoral candidacy. If Godsiff loses the ballot and there is an open selection in which Salma is selected as candidate, she will drop the mayoral bid. A lot depends on how the timings play out. She is riding two horses here.

There is an outside chance that Godsiff will lose the ballot, but only an outside chance, in my view.
"The opportunity to serve our country. That is all we ask." John Smith, Leader of the Labour Party, 10 May 1994.

I wouldn't be too unhappy if that situation plays out. Electorally speaking, Godsiff has done well for Labour over the years. But in 2019, he now seems a very awkward fit for that particular seat.

I've seen Salma Yaqoob crop up on Twitter a few times. She seems okay, certainly not one of the headbangers.
"Patience is bitter, but its fruit is sweet" - Jean-Jacques Rousseau

Does this mean even Momentumites are sick of Corbyn?

-  Mon Oct 14, 2019 2:44 pm #587890
Aaron Bastani showing off his impressive mastery of numbers here, perhaps courtesy of his time at the University of London? Inspirational stuff from the lad, always guaranteed to brighten up a dull day. 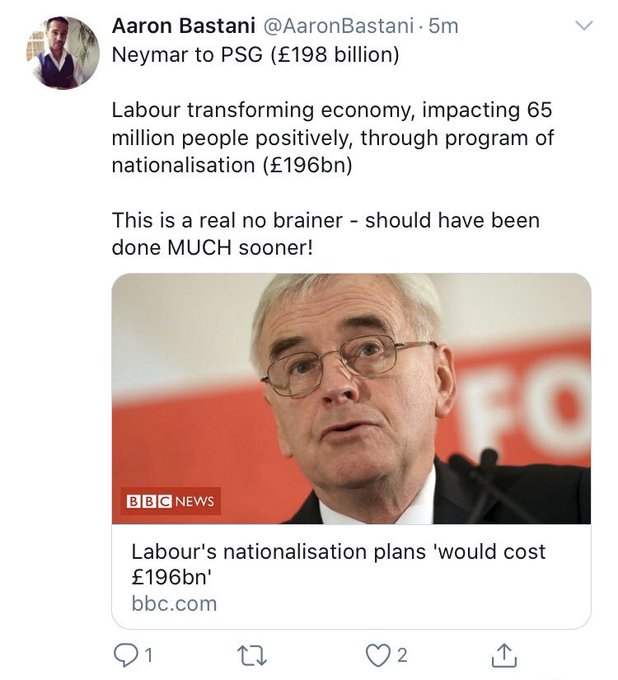 -  Mon Oct 14, 2019 4:11 pm #587898
it cost the equivalent of 110 billion dollars to send people to the moon. That's cheaper by some margin, and an incredible human endeavour. So shall we do that Aaron, or shall we stop comparing apples and oranges because it's fucking stupid?
Tubby Isaacs liked this

Hoping it opens the floodgates. :D

It's not about looking smart so much as lookin[…]

Theresa Villiers must be mopping her brow that she[…]