This really is nothing more than fluent hackese. Lazy or complicit journalism (take yer pick, you're allowed both) which gathers under the skirts of getting "this thing done". It'll all be fine once the WA is passed in to law, or so the story goes.

Easy choice, what?
Timbo liked this
Jack believed in the inherent goodness of humanity, and felt a deep social responsibility to protect that. Through us all, Jack marches on.

(Happy to help.)
Jack believed in the inherent goodness of humanity, and felt a deep social responsibility to protect that. Through us all, Jack marches on.


I'd better let our free and fearless press explain as only they can...

Kinky secret of Dorset town made famous by hit show

coutesy of Plumber Alun Horniblow (fnaaar!), from Bridport, and other 'innocent customers'.

Brexit talks: the brutal reckoning that awaits the UK.

https://www.msn.com/en-gb/news/brexit/b ... PXa0X/url
'If there's anything more important than my ego around, I want it caught and shot now". Douglas Adams.

EU officials have been preparing for negotiations with the UK on the post-Brexit relationship for more than two years, and behind the scenes many member states are urging them to take a very hard line indeed.

Five years ago, a core theme of every right-wing populist manifesto was withdrawal from the European Union. Marine Le Pen, the leader of France’s Rassemblement National (formerly the Front National), campaigned on the idea of abandoning the euro and called for “Frexit” at her rallies as recently as 2017. A few years ago, members of Alternative für Deutschland (AfD) voted to include a “Dexit” proposal in its election manifesto.

The idea was embraced by the populist right in Italy, Hungary, the Netherlands and across Scandinavia. Getting out of the EU seemed to be one of the main political demands of these parties.

And then, quite suddenly, nearly all of them dropped the idea. Having originally planned to fight the European election on the theme of leaving the EU, Germany’s AfD watered down the proposal in January, and on the eve of the election last month its co-president Alice Weidel remarked that the “Dexit” talk had “clearly weakened” the party.

Le Pen still blames the EU for many of France’s ills, but in her party’s latest manifesto both “Frexit” and the idea of scrapping the euro were shelved. “The French people have shown that they remain attached to the single currency,” the document states. https://www.irishtimes.com/opinion/how- ... 2?mode=amp 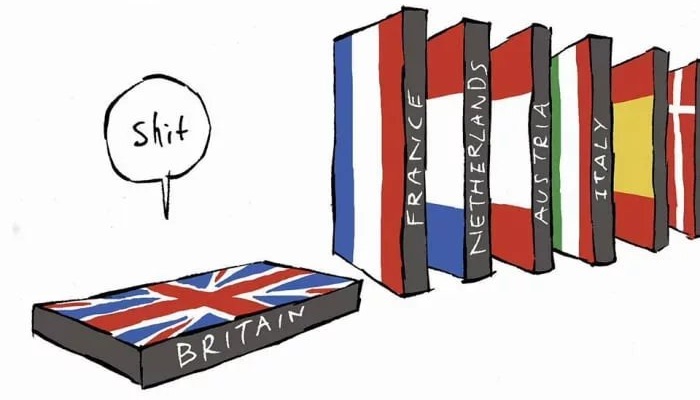 youngian, spoonman, Kreuzberger and 1 others liked this
The Red Arrow is currently appearing in 'A fine, upstanding member' at The Nottingham Playhouse.

Currently listening to: "Crank It Up (Funkyzeit edit)" by Scooter
Now part-time on Tw*tter @spoonyfrommwf

Another Putinesque photo. Will the real dumbbell p[…]