-  Sun Nov 17, 2019 8:58 pm #590786
I'm afraid I'm with Young Winston, but even less optimistic. Any new leader would have to break completely with the Milne-McCluskey-Murphy-Lansman axis, and the new membership isn't going to let their power grab go.
oboogie, Boiler, youngian liked this
Do what you can, with what you have, where you are.

-  Sun Nov 17, 2019 9:42 pm #590793
Well, guys, the only straw of hope that I can offer to be clung to is that if Corbyn gets out of the way after the defeat as he should ( and I do recognise that he may well not do so) the advantage of incumbency that Corbyn enjoyed in not requiring nominations from the PLP to contest a challenge will no longer apply for whomsoever The Cult chooses as Corbyn's anointed successor.

The threshold of nominations has been reduced, yes, and the backing of a large trade union is now also required, but virtually all of the "moderate" MPs, with a few notable exceptions (Tom), having fought off Corbynite deselection attempts, will be back. It is to be hoped that McCluskey might also be gone, and there is surely at least some hope that the rank and file membership's Corbynite fanaticism will have been at least diluted. If we can get a leader like Starmer, or even Stella or Jess, or Bridget Phillipson elected, you need to hope that might be possible.
Last edited by Abernathy on Sun Nov 17, 2019 11:24 pm, edited 1 time in total.
"The opportunity to serve our country. That is all we ask." John Smith, Leader of the Labour Party, 10 May 1994.

-  Mon Nov 18, 2019 3:13 pm #590816
The survey of Labour members I've seen places Keir Starmer as the front runner to replace Corbyn. Jez won the leadership in 2015 because enough members liked the cut of his gib and had no party machine behind him. And who wants to be saddled with being Len's candidate parroting his views on Trident and FoM? Three GE defeats also concentrates minds of sane people. Its a question of how many of them are still Labour members.

youngian wrote: ↑
Mon Nov 18, 2019 3:13 pm
The survey of Labour members I've seen places Keir Starmer as the front runner to replace Corbyn. Jez won the leadership in 2015 because enough members liked the cut of his gib and had no party machine behind him. And who wants to be saddled with being Len's candidate parroting his views on Trident and FoM? Three GE defeats also concentrates minds of sane people. Its a question of how many of them are still Labour members.

Starmer can be eliminated. The leadership will ensure only the favoured few get on the ballot. Alternatively, just put Jennie Formby in charge of counting the votes.
youngian, Malcolm Armsteen, Boiler and 1 others liked this
That subtle admixture of the absurd and the surreally plausible...
Others?

It was an unmitigated disaster. Neil asked JC about anti-semitism in the Labour Party, Corbyn's proposed "neutrality" in the Peoples' Vote referendum that Labour would set up ("If you're neutral, who would lead the Leave campaign for Labour?") , how Labour would fund the restitution payments for WASPI women given there was no budget for it in Labour's manifesto, and how Corbyn would deal with a situation where British troops had cornered a future ISIS leader wearing a suicide vest like Al Baghdadi was.

All entirely valid questions for anybody aspiring to be PM, and you'd think relatively easy for a properly prepared Labour leader to deal with.

But Corbyn was hopeless. He was trying so hard to be calm that he was practically comatose, though punctuated with his characteristic outbursts of pique ("Andrew, can I just finish?!!!") and sounded, more than anything else really, deadly dull and rather slow-witted. He really isn't clever enough for this sort of thing.

Neil was in no mood to give Corbyn any quarter whatsoever (which is how it should be) and of course, Corbyn tripped himself up on every question. That tedious old "I absolutely condemn all forms of racism, which have no place in the Labour Party or society and I've personally fought all racism my whole life....bla bla bla") formulation isn't really what's needed in response to a question about why the party you lead is so shite at dealing with what could be endemic anti-semitism now but Corbyn hasn't realised this.

Not so much a car crash as a multiple pile-up on a busy stretch of the M25.

In any big set piece leader's TV interview in an election campaign, the question that you always need to ask is whether viewing the leader's performance on TV, an undecided voter would happily decide to cast a vote that might lead to Jeremy Corbyn becoming PM. On this showing, the answer is quite simply "no". In fact it has probably had the opposite effect.

The problem is the same one it has always been for the past four years. The party has elected (twice) an individual who is utterly unsuited to the job of winning an election to return Labour to government, and unacceptable as a putative PM for far too many electors.

This could well have been the moment that Labour's fourth successive election defeat became nailed on.
"The opportunity to serve our country. That is all we ask." John Smith, Leader of the Labour Party, 10 May 1994.

If you're neutral, who would lead the Leave campaign for Labour?


Richard Burgon would be my favourite choice.
Not everyone is downhearted

-  Tue Nov 26, 2019 10:33 pm #591438
Isn't WASPI a bit "cake and eat it" though? A gender-based inequality was removed and now they want that inequality restoring, despite it being shown over many years that women live longer than men? Or am I missing something here? (dons tin hat and awaits incoming fire)

Putting that aside, I think we all know that a Corbyn-led Labour was never going to win a GE. It preached the "wrong kind of nostalgia" for the past: not sunlit village greens and bicycling vicars riding alongside a shiny steam engine on a pre-Beeching branch line but a grey and dismal past riven with industrial strife and a country rapidly descending into post-war decline.
I know I ain't common 'cause I got class I ain't never used yet.

-  Tue Nov 26, 2019 10:42 pm #591442
£58bn for WASPI is utterly indefensible. Pensions weren't "stolen" because they were never there. When they were "paying into the system", they were paying for the not very numerous pensioners at that time, who didn't always live very long.

There's definitely a case for helping the poorest of the most affected, but it's not exactly unheard of for the government to make policy decisions that affect some people badly. That's politics.

See Frances Coppola on this stuff. 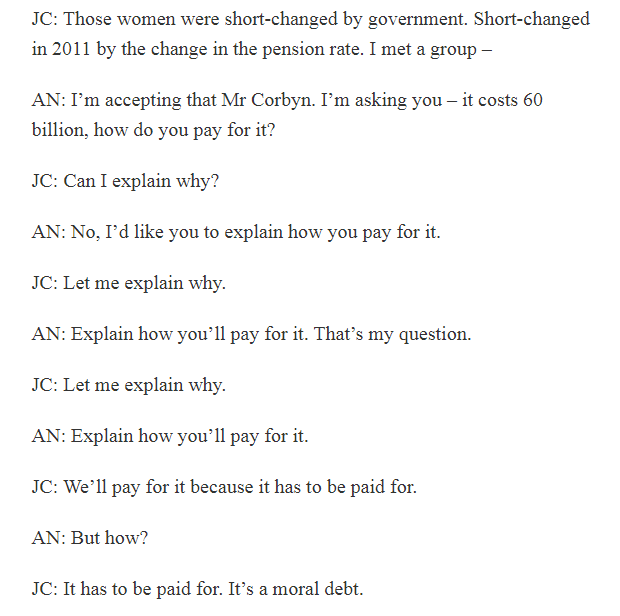 Oh. I done a spray-paint job. Not quite finished […]

*May not include Archant publications.

Some will actually be happier as a rump with no […]