FTFY
Arrowhead, Malcolm Armsteen, Catkins and 1 others liked this
Jack believed in the inherent goodness of humanity, and felt a deep social responsibility to protect that. Through us all, Jack marches on.

In England five times as many rough sleepers were seen by councils in the year than reported in official figures, which are a one-night snapshot.

Homelessness charity Crisis said the snapshot could not "hope to accurately reflect the real scale" of the problem.

The government said it was providing £500m this year to homelessness and rough sleeping services.

New official figures will be released on Thursday but the data for 2018 showed 4,677 people slept rough in England on the one night the snapshot survey was taken, down 2% on the year before but 165% up on 2010.

However council responses to the BBC showed nearly 25,000 people were recorded sleeping rough at least once in England during the latest year on record...


The official figure, which is only 20% of the actual number, shows rough sleeping up by 165%* since 2010. What year did the Tories come to power? How many different Parties have ruled since then?

This may come as a shock to you, but I really, *really*, hate the Self-servatives.

*Unless my maffs is way out (not unlikely), I make that an increase of over 800% since the era of "Caring Conservatism" began.
Narwhal narwhal swimming in the ocean
Causing a commotion
Because they are so awesome 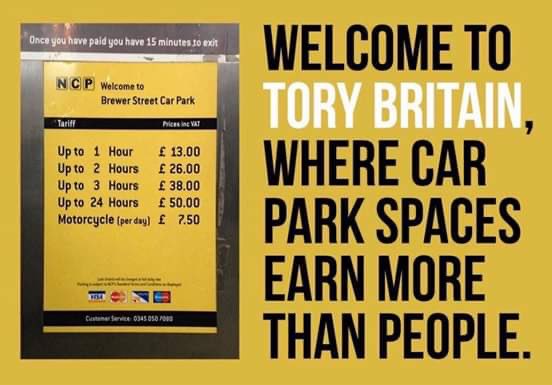 Cyclist, oboogie, lord_kobel and 1 others liked this
Sig in quarantine

Arrowhead wrote: ↑
Tue Feb 25, 2020 5:20 pm
Love how even this story is being spun into a sly, backhanded dig at Labour: "Of course, when I whipped my todger out in public back in 2007, I'd never imagine Labour would end up being so useless that I'd eventually become the MP for Leigh. The swing was 12%, y'know".

Apparently there is more to come


Grundy lives on the family farm in Lowton with his parents and sister, where they keep horses.

Before becoming an MP in December he said he had only been to London three times and needed help navigating the capital on his arrival.

“When I got off the train in London [Labour MP for Wigan] Lisa Nandy was kind enough to show me from the train to the House of Commons because I had no idea how to get there on the tube. I think I had been to London three times in my entire life,” he said.

And Mr. Grundy was in the year above me at college. We know each other. I can vouch that he knows how public transport works.
Last edited by Samanfur on Thu Feb 27, 2020 8:17 pm, edited 1 time in total.
Tubby Isaacs liked this
"It is the duty of a newspaper to comfort the afflicted and afflict the comfortable."

Because that would distance them from their electorate?
Do what you can, with what you have, where you are.

-  Wed Feb 26, 2020 9:59 pm #599407
And block a direct route to the Cabinet.
Jack believed in the inherent goodness of humanity, and felt a deep social responsibility to protect that. Through us all, Jack marches on.

They've nothing to fear from this quarter then.
Narwhal narwhal swimming in the ocean
Causing a commotion
Because they are so awesome

A rather heartbreaking illustration of where we are.
spoonman liked this
Others?

Reply
Return to “The Government”
29 Mar

Trending 'cos a lot of people really pissed off h[…]