The Red Arrow wrote: ↑
Sun Nov 03, 2019 9:14 pm
My first exposure to Gervais was when he used to inhabit a very sleazy/greasy tabloid journalist type character who held an unhealthy obsession with Charlotte Church, on C4's BIg Breakfast.

Mine was when he'd make occasional appearances on Channel 4's 11 o'clock show. Now, outside of Ali G there wasn't much to take from it and it was pretty disappointing in general (though Iain Lee has done OK on the radio presenter circuit) but I remember seeing Gervais once and I was thinking to myself "is he supposed to be funny?" I mean, I can accept that everyone has different ways of having their funny bone tickled, so to speak, from Stewart Lee to Larry David to Miranda Hart to (deep breath) Mrs Brown and plenty all in between, but I could never get what the appeal was concerning Ricky Gervais. Then, once The Office became a bit of a cult hit, he's been mostly living off that typecast since and added a major dose of arrogance & judgement. He's the type of man whom, even though quite a few people out there do think he's clever & funny, assumes that he is even more funnier & clever than what any one of them thinks he is.
Currently listening to "French Kiss" (12 inch version) by Lil Louis

-  Sun Feb 16, 2020 10:48 pm #598574
I wonder if this despicable rag is going to continue to persistently use the derogatory "snowflake". Or "mourn" the death of "snowflake" Caroline Flack. Less powerful than The S*n, but just as insidious.

-  Mon Feb 17, 2020 7:34 am #598592
The best sitcom to come out of the Office stars wasn’t from Gervais or Merchant but McKenzie Crook with the Detectorists.
randomelement, MisterMuncher liked this 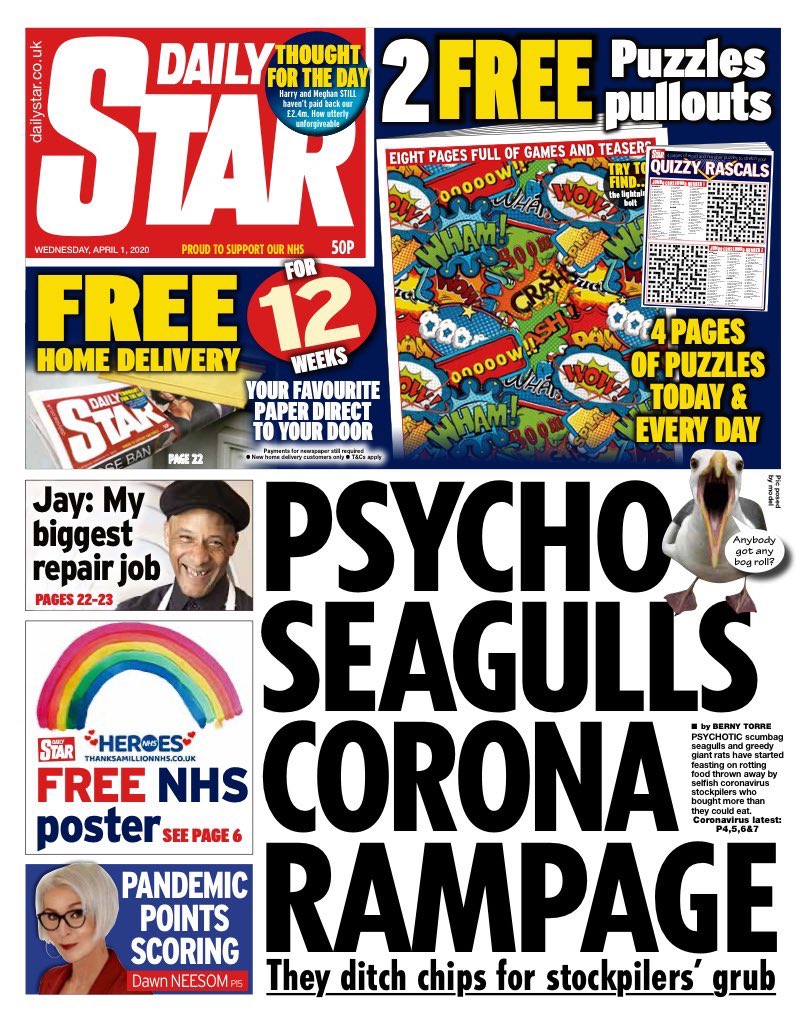 *No self-respecting actual 6 year-old would dream of wasting their pocket money on that rubbish.
This age thinks better of a gilded fool / Than of a threadbare saint in Wisdom's school - Thomas Dekker c1598

-  Wed Apr 01, 2020 1:56 pm #603182
If all these rags really wanted to thank the NHS then the best way they could do it is by telling their readers not to vote Conservative. I'm sure white van man will grateful for his rainbow poster though.
Cyclist, lord_kobel liked this

Is the Star still a paper for wankers (in a literal sense)? That'd be where it'd appeal to stereotypical WVM.
"I am not expendable, I'm not stupid and I'm not going outside."
(with apologies)

-  Wed Apr 01, 2020 3:07 pm #603198
Only just noticed the thought for the day at the top of the page. 'Harry and Meghan STILL haven't paid back our £2.4m. How utterly unforgivable' I didn't actually realise that it was our £2.4m I though it was just part of the annual expenditure that the queen makes to maintain the royal estate. If Harry and Meghan don't use the cottage it will just be used by another royal or somebody working for the royal household.
http://tiny.cc/tqugax

-  Thu Apr 02, 2020 7:42 am #603243
I once went into a newsagents and came out with a Club International because I was too embarrassed to be seen buying the Daily Mail
This age thinks better of a gilded fool / Than of a threadbare saint in Wisdom's school - Thomas Dekker c1598 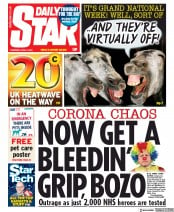 Yeah, but you're not the stereotype, are you?! As you have proven on here, you are very much one of the "good guys".
"I am not expendable, I'm not stupid and I'm not going outside."
(with apologies)
Others?

Yeah, but you're not the stereotype, are you?! As you have proven on here, you are very much one of the "good guys".

This ^^^
This age thinks better of a gilded fool / Than of a threadbare saint in Wisdom's school - Thomas Dekker c1598
Others?

While I;m slightly staggered nothing happened, I a[…]

Cats are nothing like cheese but academics and pun[…]