-  Wed May 20, 2020 7:52 pm #610502
Same here. Every day following a similar pattern, get up, have a poo, make a cup of tea, put telly on for quick perv at Susanna Reid, until Piers Moron becomes intolerable (usually about 2 minutes) then off to work. Drop various products at the usual places while listening to random CD s. Today a bit of Half Man half Biscuit.

Home for tea and coffee and veg out in the evening sun.

Malcolm Armsteen, The Red Arrow, Kreuzberger and 1 others liked this
Were going to hell in a handcart, you couldn't make it up!

In that nine weeks the only people I've had face to face conversations with who didn't live under the same roof were normally driving a green van with "Asda" written on the side. And although I'd give my right arm to go and see people, I know I can't. And I won't yet, to protect them and myself.

I'm lucky. I've worked throughout this time, my employer, to their credit, has been pretty much faultless in how they've dealt with the situation. I live in a secure house. I'm not at risk, I have regular food deliveries, a mountain of books to read, and several streaming services.

But I'm conscious of the four people I know working on the front line, and putting themselves at risk on a daily basis.

So you must excuse me if I start grinding my teeth when I see those pictures of Scarborough, Southend, Bournemouth, and probably several others. When I saw the interview with a woman saying "I think it's disgusting that all these people are on the beach" whilst sitting on said beach herself with three generations of her family (I suppose they could all live together of course...) I felt like giving up.

At the end of the day, it's all very well saying use your common sense, but we haven't got any! We're thick as mince in this country. Dumb as a box of dirt.

I can see a second wave coming a damn sight sooner than they think. I hope I'm wrong. In the meantime, I'm not going anywhere.

All good things come to those who wait.

Look after yourselves.
The Red Arrow, Malcolm Armsteen, Boiler and 4 others liked this
"He's the leader of the gang. He's the top, he's the tip, he's the championship. He's Top Cat. And he's scum!"

-  Wed May 20, 2020 11:14 pm #610530
On the way home from delivering my mum's shopping I visited the re-opened chippy for some socially distanced and badly missed unhealthy dinner. Later, my evening walk was the noisiest ever and there's even been what looked like a couple of con trails during the day. I also hope I'm wrong, but like KevS above, I fear that the return to what passes for normality will be hurried, badly-organised and dangerous.
spoonman, Oblomov liked this
We've got democracy! Who needs solidarity?
Others?

-  Thu May 21, 2020 7:20 am #610539
If everyone else is okay with this; there are so many posts within this thread that are supportive, helpful, or reaching out for reassurance. The only way I can respond is to offer everyone a "like", "hug" etc
I hoped that doesn't sound as if I'm disinterested in you as individuals and how you are feeling, but that I know that we are all effected by this in many different ways, and that we are all Mailwatchers
Boiler, Kreuzberger, The Red Arrow and 3 others liked this
The world is not full of arseholes; but I always seem to encounter at least one a day!
Others?

OK here. but trauma last night when littlest grand-daughter (who should have been in bed) went into her big sister's bedroom and nicked a pack of Blu-Tak. Which she managed to weave into her rather lovely blonde locks. She is now the devastated owner of a fringe...

Nothing worth having on the trail cam, but the 2nd one has arrived, so we'll see. Also expecting 6 months' supply of toilet roll from Who Gives A Crap. And some superb sauces from Verstegen. Funny how these things go.

And yes, Mailwatch has kept my feet on the ground a few times lately. Thanks, all.
Boiler, Kreuzberger, The Red Arrow and 2 others liked this
Do what you can, with what you have, where you are.

Was informed today would be rainy and miserable, it's actually quite pleasant so the garden beckons again to juggle answering enquiries and preventing the curiously omnivorous cat from eating our herb garden.
The Red Arrow, Malcolm Armsteen liked this
You made him a poacher yourself, Squire
When you'd give not the work nor the meat
And your barley-fed hares robbed the garden
At our starving poor little one's feet

I woke up at about half past six and couldn't really get back to sleep so here I am. Shortly will go and pour some water over me and scrub myself with the bog brush, and then find a packet of nails; if it is dry later I'll make a start on finishing the furniture skates. I think I'll just take a hand saw to the wood, I'm not sure it's worth the effort to extract the thumping great Makita out of the kitchen cupboard. I've just had an e-mail from the local BMW dealer saying their parts department is open, so I may look into buying a gasket that'll hopefully stop oil leaking from the valve cover on to the exhaust manifold. It's been a long time since I've had spanners on a car, and I've never really done it to this one yet. The thought of unbolting six ignition coils though...

Oblomov, The Red Arrow, Malcolm Armsteen liked this
"I am not expendable, I'm not stupid and I'm not going outside."
(with apologies)

The Blu-Tak was part of an 'experiment' to make slime. Blu-Tak, glue and some other stuff. Kids, eh?
lambswool liked this
Do what you can, with what you have, where you are.

-  Thu May 21, 2020 3:00 pm #610614
Woodbashing completed, glued up and clamped. Now I'll leave that for 48 hours and then drill and fit the castors to them. Hopefully I will remember where the washers are - I know where the screws and Nylocs are. 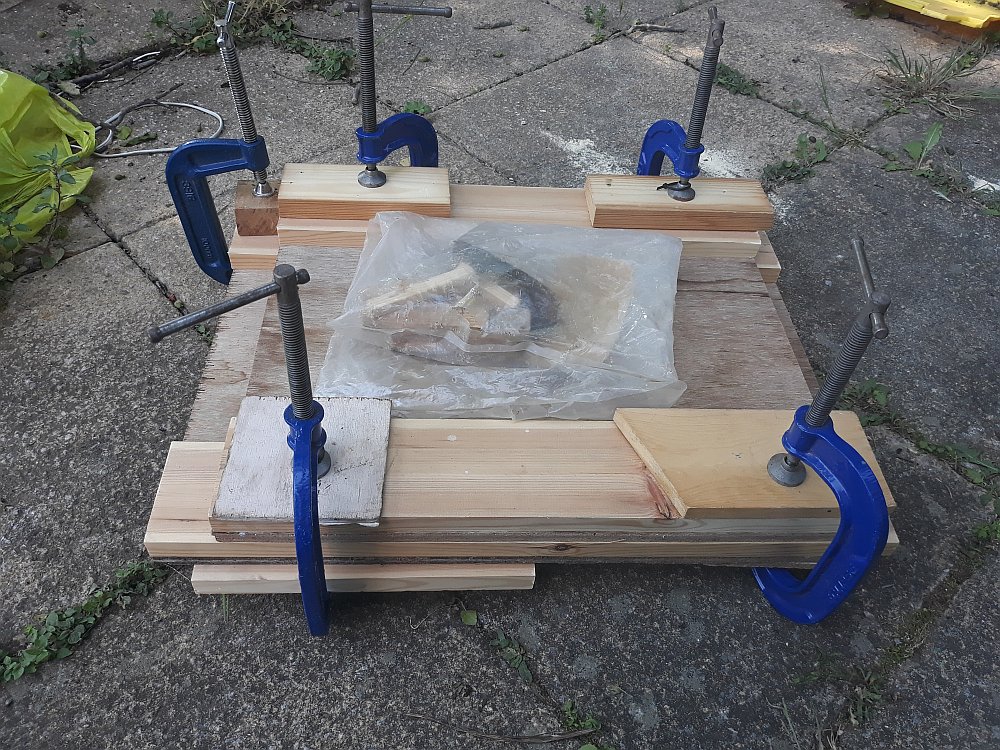 Malcolm Armsteen, Oblomov, The Red Arrow liked this
"I am not expendable, I'm not stupid and I'm not going outside."
(with apologies)

Malcolm Armsteen wrote: ↑
Thu May 21, 2020 10:54 am
Apparently grand-daughter has now decided she likes having a fringe and can't understand why she didn't do it earlier...

The Blu-Tak was part of an 'experiment' to make slime. Blu-Tak, glue and some other stuff. Kids, eh?

Still have a kilo of so of borax kicking about from the last time we did that here. Great way to spend an afternoon.
Ní uasal aon uasal ach sinne bheith íseal: Éirímis

You too. It's a sad thing to say but I'm like that every time I step out of the house and go anywhere near people or even touch things. It's not a good way to live, but for now...
"I am not expendable, I'm not stupid and I'm not going outside."
(with apologies)
Others?

-  Thu May 21, 2020 9:18 pm #610697
It's pretty much back to normal out there now in terms of bodies/cars/noise. I even saw the return of the fuckwit wheelieing a mini-motorbike down the length of the road in the dark without lights or a crash helmet.
We've got democracy! Who needs solidarity?
Others?

-  Thu May 21, 2020 9:45 pm #610700
My favourite thread on here at the moment, it's supportive and encouraging. We all are dealing with this situation in different ways, myself by not really giving a fuck, others are more concerned about health etc.

Keep up the good work and stay well.
The Red Arrow, Boiler, Malcolm Armsteen and 3 others liked this
Were going to hell in a handcart, you couldn't make it up!

Reply
Return to “Other Political Discussion”
30 May

Drop box >shudders< Thanks for that. After […]

Like a Mel Brooks movie. Nothing left but channell[…]