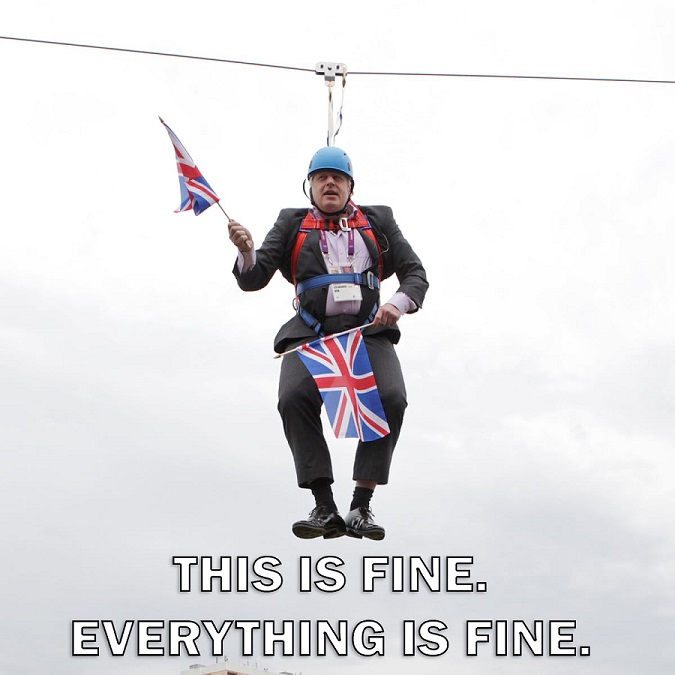 -  Mon May 25, 2020 7:28 pm #611479
I think that in not sacking Cummings (with an option of bringing him back onto the govt payroll after a decent interval, while still no doubt taking his advice on an informal ad hoc basis), Johson has made a very serious error that could yet prove fatal to his premiership. He has demonstrated that he himself cannot function without his Wormtongue.

More to the point, the retention of Cummings is actively dangerous to peoples' lives, effectively, in many peoples' eyes, giving them carte blanche to act according to their own "instincts" and disregard social distancing and lockdown rules, spreading the virus and leading to a renewed spike in infections and a potential winter of mass casualties.

Politically, retaining the shamelessly arrogant Cummings, he has undermined the credibilty of his government, and certainly its moral authority, for probably the remainder of its term.

Of course, also politically, the retention of Cummings can probably only be good for a Labour Party re-born as a credible alternative government in waiting under Starmer. To quote Uncle Monty "shat on by the Tories, swept up by Labour".
mattomac, Oblomov liked this
"The opportunity to serve our country. That is all we ask." John Smith, Leader of the Labour Party, 10 May 1994.

-  Mon May 25, 2020 8:05 pm #611488
I've sat here listening to Iain Dale tonight. Because he's been relatively even handed over this but has said Cummings must go, the fuckloons are basically making him out to be Arthur Scargill, accusing him of not showing loyalty to Johnson.

To which he quote rightly said, why should I?
"He's the leader of the gang. He's the top, he's the tip, he's the championship. He's Top Cat. And he's scum!"

The virus doesn’t give two shits about Dom or Boris’s spin. That second spike is coming, right when they want to reopen schools and shops.

-  Mon May 25, 2020 9:02 pm #611500
I'm really torn here. I so want to see the figures keep falling so that even the currently shielded can finally walk out on a summer evening again. But a bit of me also wants that second spike to come so I am able to say "See, you dozy cunts? SEE? This is fucking real and it's YOUR selfish actions that are causing it. YOU are the reason your Nan's dead, YOU. Not anyone else, YOU."
Last edited by Boiler on Mon May 25, 2020 9:35 pm, edited 1 time in total.
"I am not expendable, I'm not stupid and I'm not going outside."
(with apologies)

-  Mon May 25, 2020 9:53 pm #611514
The grand-girls came and saw us across the front garden this afternoon. I do miss them, the easy companionable lean of the little one when she comes and tells you something important she's learned, or the elder one sitting cross-legged and educating me.

I just hope the time will come...
Do what you can, with what you have, where you are.

KevS wrote: ↑
Mon May 25, 2020 8:05 pm
I've sat here listening to Iain Dale tonight. Because he's been relatively even handed over this but has said Cummings must go, the fuckloons are basically making him out to be Arthur Scargill, accusing him of not showing loyalty to Johnson.

To which he quote rightly said, why should I?

And you're surprised? if you're not totally subservient to Cummings you're guilty of treason. We called Blessed Leader's acolytes a cult, but this lot make them look positively sceptical.
We've got democracy! Who needs solidarity?

Arrowhead, Timbo, Samanfur liked this
The Red Arrow is currently appearing in 'Ram it home, Mrs Henderson' at The Minack Theatre, Penzance
Others?

-  Tue May 26, 2020 11:27 am #611582
In defending Cummings yesterday Johnson claimed that his eyesight had also been affected by the Coronavirus but a journalist has dug up an article from 2014 in which Boris claimed that he was as blind as a bat and couldn't get around the house without wearing his glasses. One lie just seems to beget another lie.
Timbo liked this
http://tiny.cc/tqugax

Reply
Return to “The Government”
09 Jul

Are they doing it all for a joke, do you think?

This cheeky attack ad is being labelled as &lsqu[…]