davidjay wrote: ↑
Fri Jul 03, 2020 12:58 am
I wonder if the name Ghislaine Maxwell might be causing Boris some lost sleep and there might be a connection with the hold Cummings has over him?

Seems like Johnson only knew her some considerable time ago, so I suspect he's (regrettably) probably not being looked at in the same manner as prince no-sweat.


Ghislaine Maxwell is the schmoozer and helping hand rather than someone who those in power feel they have to network with. And Johnson has the FSB to secure teenagers at parties for him.

How come Captain Bob’s daughter got a posh name when her brothers are called Ian and Kevin?

Wiki wrote:Maxwell had an unusually close relationship with her father and was widely credited with being her father's favourite child. The Times reported that Robert Maxwell did not permit Ghislaine to bring her boyfriends home or to be seen with them publicly, after she started attending Oxford University.

-  Fri Jul 03, 2020 11:25 am #616370
Johnson's going to give a press conference where he tries to make people less keen on pubs. He'll probably fuck that up, and after about 2 seconds start talking about his favourite drinking game or something.

Not that I can go, being in Wales, but I don't think I'd fancy it anyway. I don't know how it'll go, but it seems unnecessary to start with a Saturday.

-  Fri Jul 03, 2020 11:46 am #616373
I'm going to call it now - the press conference will be full of "do your duty" nonsense and "great british pint" gibberish, with a very small, once mentioned caveat of being sensible so that as and when there are any second spikes they can simply say "well you didn't listen, did you?".

In all these "Wahey! Up the lads, get down the boozer!" performances, you can almost see Cummings chuckling away at all the lovely data on herd immunity he's going to get, thinking how very, very clever he is and with absolute contempt and loathing for everyone he's going to end up killing off just to test his pet theory.

I dislike Johnson immensely. He's a deluded, lazy, greedy, stuck-up oaf. But in some ways no worse than any other Peter principle manager. Cummings however I find unbearable because he's clearly, CLEARLY not a clever man. He's just an extraordinarily arrogant man who's developed a knack for prodding poorly informed people to go a certain way, who has lucked out on getting paired up with a bunch of sociopaths and suck-ups who let him do what he wants and shield him from the consequences (for now), and has read all that to confirm he is the absolute out-of-the-box genius he thinks he is as opposed to another boring bigot convinced they can see things others cannot.

I genuinely cannot wait for his inevitable fall, because he is nowhere near smart enough to see it coming or to be able to get out of it, and too arrogant to not bring it upon himself by pushing his luck.
Boiler, Zuriblue, Andy McDandy and 3 others liked this
Others?

crabcakes_windermere wrote: ↑
Fri Jul 03, 2020 11:46 am
I genuinely cannot wait for his inevitable fall, because he is nowhere near smart enough to see it coming or to be able to get out of it, and too arrogant to not bring it upon himself by pushing his luck.

Any chance his fall could be from a fourteenth floor window?
"I am not expendable, I'm not stupid and I'm not going outside."
(with apologies)

Wiki wrote:Maxwell had an unusually close relationship with her father and was widely credited with being her father's favourite child. The Times reported that Robert Maxwell did not permit Ghislaine to bring her boyfriends home or to be seen with them publicly, after she started attending Oxford University.

He suspected that any man seeking his daughter was a gold-digger.

crabcakes_windermere wrote: ↑
Fri Jul 03, 2020 11:46 am
I genuinely cannot wait for his inevitable fall, because he is nowhere near smart enough to see it coming or to be able to get out of it, and too arrogant to not bring it upon himself by pushing his luck.

Any chance his fall could be from a fourteenth floor window?

Joking aside, I think this is a genuine risk they are ignoring. All it's going to take is one person who loses a child, or a partner, or is financially ruined. Possibly more than one of those things at the same time. Quite possibly a former supporter too, who thought they'd be one of the OK ones and then found there was no help as soon as they were of no use to them.

With previous Tory regimes you'd get the callousness of indifference. With this one you get full-on, loathing contempt, with Cummings buggering off to Durham, Mogg relocating his business to the EU and Johnson's dad fucking off to Greece.

One person snaps, and Cummings or Johnson - Cummings in particular, seeing as he seems to have a very low level of security - could find themselves suddenly facing consequences they have no way of lying their way out of.
spoonman, oboogie, Boiler liked this

-  Fri Jul 03, 2020 2:26 pm #616391
Depends who the deliverer of said martyrdom is.......what if we had another Thomas Meir, or even any white, middle class male, wonder how that would play out
The world is not full of arseholes; but I always seem to encounter at least one a day!

Was on the phone to my mum the other day, talking about it all. She said "I don't think Keith Starmer or whatever could do any better. Who could?". Then telling me to move on when I said that, for example, Angela Merkel or Jacinda Arden could be considered. "Oh, that's different! You can't compare them!".

However something occurred to me this morning as I was doing some work at one of my libraries. Talking to staff (all working class, red wall types), they were all saying that they were turning to CNN, Sky, Al Jazeera, MSNBC etc for their news. OK, small sample and not representative, but it made me think. We've got a media in this country, and I think a political class, that pays very little attention to outside voices. The obsession is with how something will play with the homegrown media. Views from outside don't even figure.

But more and more of us do have friends and family abroad, whether you're an arch remainer urban elitist or a tyre fitter from Hemel Hempstead. And word on how we're seen from outside will start to take an effect.

For example, I have friends in Ireland, Germany, France and the Netherlands. And all report that the common view of Johnson, Cummings et al is "The holy fuck did this come to happen?".
"There ain't nothing you fear more than a bad headline, is there? You'd rather live in shit than let the world see you work a shovel."
Others? 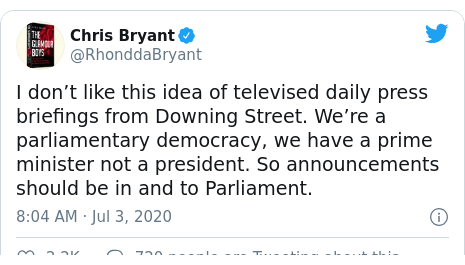 It is understood an experienced broadcaster will be recruited to host the question-and-answer sessions.

Asked whether we would himself appear every day, the PM said this was "not the plan" but he would be "popping up from time to time".

It is understood an experienced broadcaster will be recruited to host the question-and-answer sessions.

I think Darren Grimes is looking for new interviewees at the moment...
"The architectural style is early maniac" - Vila Restal
Others?

The Red Arrow liked this
That subtle admixture of the absurd and the surreally plausible...

Reply
Return to “The Government”
03 Dec

There's no record of her trying to put a motion or[…]