It's "Thrown in the tower" as any fule kno.
The educated differ from the uneducated as much as the living from the dead. Aristotle 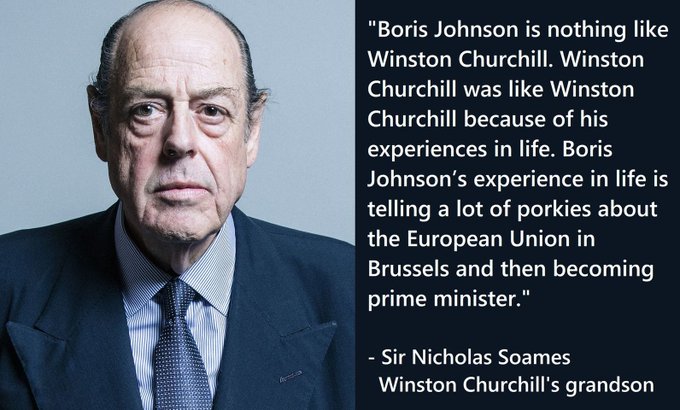 Plastic Mancs, you see. They pretend to be some kind of real deal but, in truth, well, yeah. It's just a tribute act.
Jack believed in the inherent goodness of humanity, and felt a deep social responsibility to protect that. Through us all, Jack marches on.

The educated differ from the uneducated as much as the living from the dead. Aristotle
Others?

-  Wed Sep 30, 2020 9:34 pm #625152
I had to laugh today when Tory MPs were moaning in the commons that the government were not treating them with enough respect. What did these MPs expect when they elected Johnson as their leader. He has never had any respect for his fellow Tory MPs all he thinks about is himself.
http://tiny.cc/tqugax

Under one in three...

I suppose we should be thankful it wasn't "Less than".
This age thinks better of a gilded fool / Than of a threadbare saint in Wisdom's school - Thomas Dekker c1598

Either learn our language or fuck off back home.

EDIT: Wheelie got there first!
Jack believed in the inherent goodness of humanity, and felt a deep social responsibility to protect that. Through us all, Jack marches on.

He made a Faustian Bargain with the no-deal Brexit supporting part of electorate, Murdoch and some of his backbenchers last year. Now, I'm as anti lockdown as they come (I am NOT a conspiracy theorist, I know the virus exists and can be dangerous but I believe hard lockdowns and restrictions to be disproportionate and causing more damage than the virus) but events have very much overtaken Johnson and he won't have the luxury of four years now to "own the Left and enjoy the fruits of his Brexit labours ". The libertarian wing of his party, the most influential wing, smell blood.

He leaves without a deal - he has served his purpose. Thank you and goodbye. Covid is now the only issue in town and it's been a shambles, a shambles that has restricted civil liberties more than any other event in our lifetimes. A no deal exit means that he has served his purpose and it would then be time for someone to ride in to prepare for 2024 and if I was a betting man, I'd would think his initials would be R.S.

He leaves with a deal - he's as much of a traitor as May in their eyes. This is not the Brexit they wanted, he's out. They did for the last two Conservative leaders and he is no different.

Perhaps he knows this and wants to go. His complaints about money, that he's spent some of time as PM seriously ill, the fact he can't get out of Covid making "Churchillian" speeches, these may all be factors. He's already achieved his dream. It will then be about him getting his exit on his own terms. Will he be given it in exchange for their landslide majority?

This was the pact he made. The job he always wanted for courting people who will now turn on him no matter what he does.

This is why he looked like a naughty child who'd been caught behind the bike sheds smoking the day after the referendum when he was called in front of Cameron. This wasn't the way it was supposed to be. It was supposed to be a glorious defeat so he could appeal to both sides after in his bid for leadership after Cameron. So he could say to Remainers "well, I fought for what I believed in but you won, you spoke and now we must make the best of our relationship with Europe" and to Leavers "I tried but the Establishment were against us. I did my absolute best for you but there's nothing we can do now, I'll still snipe at Europe to serve your interests". To be an outward looking, cosmopolitan liberal and a reactionary, right-wing ultra conservative simultaneously.

None of this was how it was meant to be. I would say the heart bleeds but it really doesn't.

-  Fri Oct 02, 2020 2:30 pm #625324
The irony was that if anyone could have made the case for an arms-length but friendly relationship with the EU (just Customs Union membership would be enough to avoid most of the difficulties we're facing) and sold it to the Sun readers, it was him. But he played up to the extremists, alienated the reasonable wing, and is now stuck.
davidjay, Timbo, Samanfur and 1 others liked this
"There ain't nothing you fear more than a bad headline, is there? You'd rather live in shit than let the world see you work a shovel."

I notice his latest with additional grovelling to Trump (you can’t rim him currently Boris he is not very well) was that the British public enjoyed themselves a bit too much.....

Err I can’t think who told them to “eat in to help out” and return to your offices to save Pret.

Reply
Return to “The Government”
27 Oct

Mitch McConnell will go down as one of the greates[…]

That's the busiest part of the existing networ[…]