Kreuzberger, Oblomov liked this
This age thinks better of a gilded fool / Than of a threadbare saint in Wisdom's school - Thomas Dekker c1598

You know where this is leading, don't you?
"I am not expendable, I'm not stupid and I'm not going outside."
(with apologies) 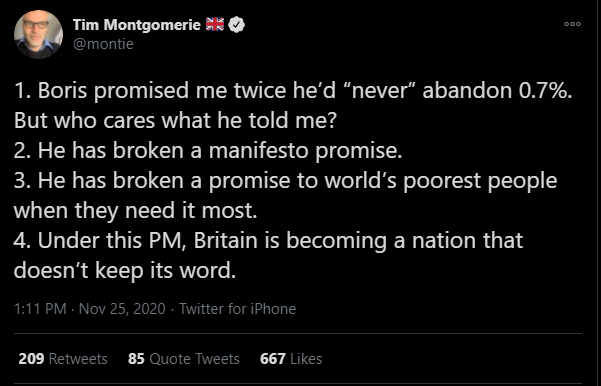 If I get a few "disagree" hate-clicks for this post, I will happily compile a list.
Jack believed in the inherent goodness of humanity, and felt a deep social responsibility to protect that. Through us all, Jack marches on.
Others?

He's trending on that twitter atm. Some of the titters to be had aren't recycled.
Timbo liked this

Yebbut he "had no alternative"....

[In which he echoes another of his heroes, and simultaneously demonstrates his utter poverty of imagination]

Not to worry readers, he'll soon be spit-roasted by a horde of torch and pitchfork wielding home counties backbenchers.
The ones who knew "levelling up the North" was nothing but an amusing bit of ecky-thump baiting..
The ones who think it's the end of the world when it comes to "levelling down the South".
The educated differ from the uneducated as much as the living from the dead. Aristotle

-  Wed Dec 02, 2020 10:49 am #631751
Demonstrating the essence of the chaos at the top through the medium of Scotch eggs is sublime. Its the sort of nonsense Johnson would latch onto but is now the butt of this amusing illustration.
The Red Arrow liked this